Long Island’s threatened native river herring (alewife) are diadromous, meaning they live in both salt and freshwater throughout their life cycles. Each spring, adult fish migrate from the ocean and “run” up Long Island’s rivers and streams to spawn in fresh water. Dams and culverts along these freshwater tributaries block access to much of the spawning ground needed for these ecologically important fish.

Restoring native diadromous fish runs is crucial to the health of Long Island’s rivers and estuaries because these fish provide a vital food source for many of our wildlife species including osprey, herons, and even whales! As a member of Long Island’s Diadromous Fish Work Group, PBK supports partner organizations such as Seatuck Environmental Association and Peconic Estuary Partnership in their efforts to monitor, stock, and improve access for these native fish in the Peconic and South Shore Estuaries. Beginning in 2019, we have also lead efforts to coordinate volunteer monitoring at Southampton’s Alewife Creek. This run is currently recognized as the largest in the Peconic Estuary. 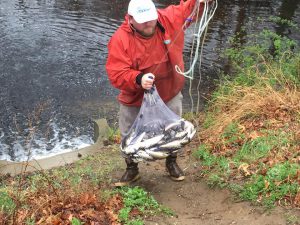 In April 2017, we worked with Seatuck Environmental Association to track and transport alewives at the east outfall of Massapequa Lake. We captured 61 alewives, two rainbow trout, one yellow perch, and one silverside. All of the alewives were released in freshwater above the dam, while the other species we released below the dam.

Check out this video of Woodhull Dam taken during the 2020 spring run. Efforts are underway to have a fish passage in place here by the spring of 2022!

Check out the first sighting of 2019 from Alewife Creek

For more information on the effort to monitor alewives on Long Island, visit the Seatuck Environmental Association website.

Back to Programs Green Marinas